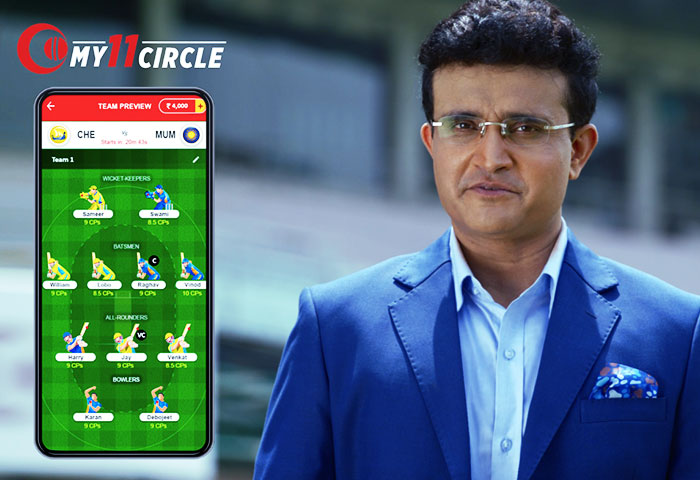 The new campaign launched by Games24x7 is part of the company’s continued efforts to revolutionise game playing experience for all fantasy sports enthusiasts.

Taking the fantasy gameplay experience to the next level in 2019, My11Circle introduced the ‘Beat the Expert’ contest — the only fantasy sports contest that allows a player to make a team and play directly with legendary cricketers. Riding upon this product innovation, My11Circle has grown leaps and bounds to become one of India’s top fantasy sports platforms in just one year since its inception in 2019.

The new series of commercials will run across live cricket both on Star Sports Television and Hotstar. Apart from live cricket, the brand also plans to showcase these commercials on various digital platforms to amplify the reach among the vast cricket fan base.

Sourav Ganguly, Brand Ambassador, My11Circle said, “My11Circle’s ‘Play with Champions’ has become a buzzword among fantasy sports lovers within a year. Fantasy cricket is a game of mind and superior skills. It gives me immense pleasure to be associated with an innovative brand like My11Circle. This association gives me a chance to make my fantasy cricket team, and play directly with so many cricket fans that bring back fond memories of my cricketing days. Stay safe and enjoy the game.”

Speaking about the launch Avik Das Kanungo, Director – Brand and Marketing Strategy, Games24x7 said, “The new campaign featuring Mr. Sourav Ganguly brings alive the fun and thrill of My11Circle’s core proposition of ‘Play With Champions’. This cricketing season, our objective is to reach out to more and more cricket enthusiasts through this campaign and tell them about our exciting proposition that allows them to play directly with the legends of the game they have idolised over the years. We are confident that fantasy sports players will love the campaign and the proposition.”

My11Circle aims to provide awesome game playing experiences to fantasy sports players by enabling them to play with sports champions they have idolised over the years. Players from all over the country can compete with the fantasy teams of these champions for more fun and for winning higher rewards on the fantasy platform. The gaming platform has hosted three champion cricketers so far: The prolific leg-spinner and Afghanistan cricketer Rashid Khan, former and iconic Indian cricket captain Sourav Ganguly and legendary Australian all-rounder, Shane Watson.

During this cricketing season, My11circle plans to host a weekly tournament that will create a crorepati on the platform. Apart from this weekly crorepati tournament, the company also plans to reward the skills of the top and most consistent fantasy cricket player of this season on My11Circle with a prize money of Rs 2 crore.

With its understanding of player behaviour and ability to offer hyper-personalised offerings across its gaming platforms, Games24x7 continues to extend awesome game playing experiences to more and more Indians.

About Games24x7 (formerly Play Games24x7):
Founded by New York University alumni Trivikraman Thampy and Bhavin Pandya in 2006, Games24x7 is one of India’s leading gaming companies with a full-stack portfolio of Skill Games and Casual Games including RummyCircle and My11Circle. Backed by the marquee firm Tiger Global and a host of investment entities from the US, Games24x7 continues to expand its stronghold in the Indian gaming industry, while diversifying and investing in other technology opportunities and expanding its gaming business to the international gaming markets. With a 450 strong team, Games24x7 has offices in Mumbai, Bengaluru, and Miami. By leveraging technology, product innovation, data science, and experience, Games24x7 aims to become a 21st-century scientific gaming company: built out of India for the world.