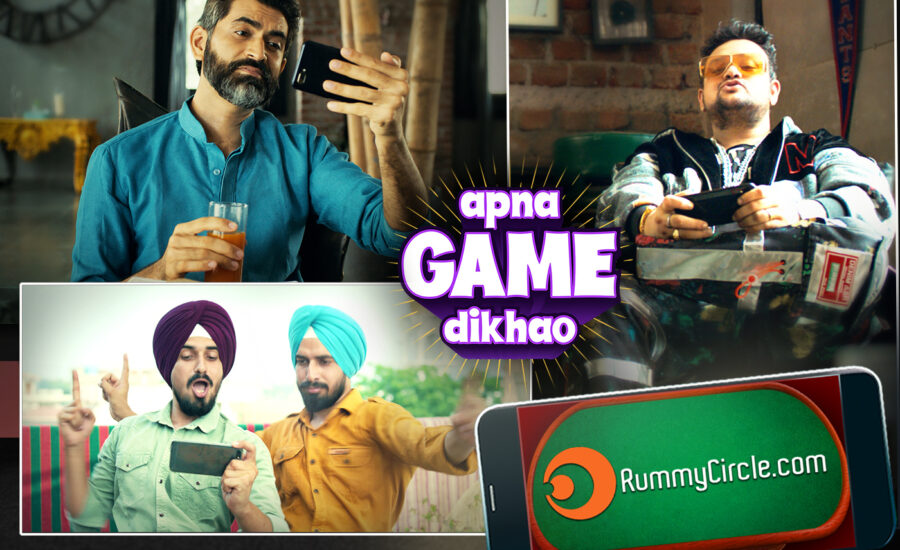 Games24x7’s 360° marketing campaign is a first-of-its-kind initiative in India’s online Rummy category and part of the company’s continuous efforts to extend awesome game playing experiences to all Indians.

India, July 20, 2020: Games24x7, one of India’s leading online gaming companies, unveiled a new positioning — ‘Apna Game Dikhao’ for its rummy platform, RummyCircle. The new marketing campaign aims to bring out light-hearted competitiveness of the game among the players and invites players from all over India to join the platform and show off their rummy skills.

RummyCircle is the flagship product of Games24x7’s full-stack gaming portfolio of skill games (RummyCircle and fantasy sports platform My11Circle) and casual games. Launched in 2009, RummyCircle is currently the most popular online skill gaming platform in India.

The new positioning campaign portrays a myriad of emotions that goes on in the mind of a rummy player while playing the game online. Through a slice-of-life format, the brand film perfectly captures the fun, entertainment, and immersive game playing experience that RummyCircle offers.

The marketing campaign includes a high-decibel television campaign that will air across genres on all leading television channels. Apart from Hindi Speaking Market, customised versions of the TVC will run across major regional channels in West Bengal, Gujarat, Maharashtra, Punjab and Uttar Pradesh.

The campaign will also run across all major OTT platforms and YouTube and the new positioning will be further amplified through high-frequency campaigns on social media and other digital platforms. The company aims to widen the reach of the campaign through strategic sponsorships and tie-ups with influencers across different regions of the country.

Speaking about the launch Avik Das Kanungo, Director – Brand and Marketing Strategy, Games24x7 said, “As one of the pioneers of mobile gaming in India, we aim to establish the popularity of rummy as a competitive skill game of great entertainment value. We have seen a consistent increase in interest for the game from players across the country. While online rummy as a category is popular in the South markets, our research has shown a substantial rise in interest from players in the other parts of the country. The primary objective of this new positioning campaign is to expand our brand footprint beyond the South market, which includes Hindi Speaking Markets (HSM), Maharashtra, Gujarat and West Bengal. The #ApnaGameDikhao campaign brings alive rummy as a thinking person’s game, and we hope new players visit www.rummycircle.com and discover the awesome game playing experience.”

Speaking about ‘Apna Game Dikhao’ Arun Iyer, Founder and Creative Partner, Spring Marketing Capital said, “Rummy has always been part of our culture. It is often played as a fun, inclusive, engaging game in different Indian households and by every family member. Rummy is also a game of skill. Rummy Circle’s ‘Apna Game Dikhao’ campaign aims at bringing newer and diverse players into the world of online Rummy to test their skills and have fun, just like they would at home.”

Games24x7 has been investing aggressively in its India-centric mobile games business, while also diversifying in the international gaming market in addition to building new and path-breaking technology products.

About Games24x7 (formerly Play Games24x7):
Founded by New York University alumni Trivikraman Thampy and Bhavin Pandya in 2006, Games24x7 is one of India’s leading gaming companies with a full-stack portfolio of Skill Games and Casual Games including RummyCircle and My11Circle. Backed by the marquee firm Tiger Global and a host of investment entities from the US, Games24x7 continues to expand its stronghold in the Indian gaming industry, while diversifying and investing in other technology opportunities and expanding its gaming business to the international gaming markets. With a 450 strong team, Games24x7 has offices in Mumbai, Bengaluru, and Miami. By leveraging technology, product innovation, data science, and experience, Games24x7 aims to become a 21st-century scientific gaming company: built out of India for the world.