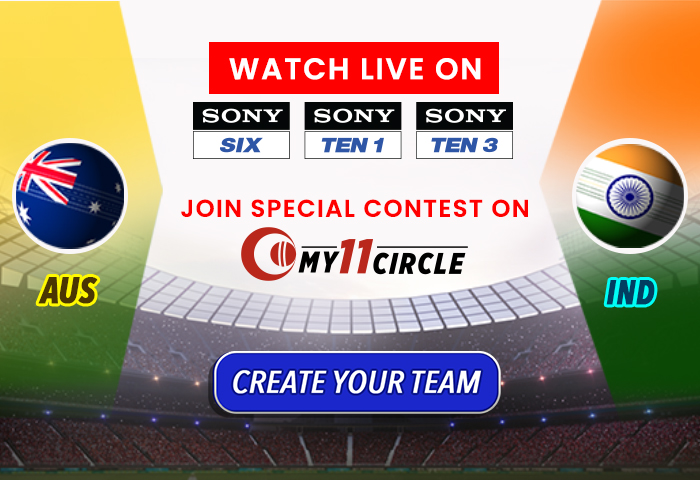 SPN will announce the contest winners for each T20i match in its flagship studio show Extraaa Innings on SONY TEN 1, SONY TEN 3, and SONY SIX channels.

The runners-up of the entire series will receive the authentic pink test balls merchandise powered by My11Circle.  There is no entry fee for this contest.

Launched in 2019, with a unique proposition for fantasy players to ‘Play with Champions’, My11Circle has grown by leaps and bounds to become one of India’s top fantasy sports platforms.

Speaking about the launch Avik Das Kanungo, Director – Brand and Marketing Strategy, Games24x7 said, “Within a short span of time, My11Circle has become a popular destination for fantasy cricket in India, commonly referred to as the platform where you ‘Play With Champions’. We are delighted to partner with Sony Pictures Networks India for this special contest for cricket enthusiasts. Our primary objective is to reach out to more skill gamers through this partnership and enable them to exercise great skill and knowledge of cricket to make teams they think will perform best using a wide array of authentic facts.”

Rohit Gupta, Chief Revenue Officer – Ad Sales and International Business said, “We are pleased to collaborate with My11Circle, one of the country’s biggest fantasy sports platforms, to engage their users with a fun engaging experience during the ongoing India Tour of Australia’s T20i series which will be broadcast LIVE on Sony Six ,Sony Ten 1 and Sony Ten 3 channels. My11Circle users will get a unique opportunity to participate in contests specially curated for them while enjoying the matches LIVE on Sony Sports channels and the winners will win a once in a lifetime opportunity to be featured on the LIVE broadcast of our studio show Extraaa Innings alongside our eminent panellists.”

With its understanding of player behaviour and ability to offer hyper-personalized offerings across its gaming platforms, Games24x7 continues to extend awesome game playing experiences to more and more Indians.

Founded by New York University trained economists Bhavin Pandya and Trivikraman Thampy in 2006, Games24x7 is an India headquartered online gaming company with a portfolio that spans skill games (RummyCircle and My11Circle) and casual games (Ultimate Games). Backed by marquee investors like Tiger Global and The Raine Group, the company specializes in using behavioural science, technology, and artificial intelligence to provide awesome game playing experiences across all its platforms. Games24x7 operates RummyCircle, the leading online rummy platform in India, and My11Circle, one of the country’s top fantasy sports platforms. The company has also set up a casual games studio, Ultimate Games, to launch new games for the global market. The diverse, talented, and passionate Games24x7 team is spread across three continents with offices in Mumbai, Bengaluru, Kiev, Philadelphia, and Miami. For more information, visit www.games24x7.com.

The network is recognized as an employer of choice within and outside the media industry. SPN is a recipient of several awards, including India’s Best Companies to Work For 2020 by the Great Place to Work® Institute, India, ‘Aon Best Employers India’ awards in recognition of SPN’s unique workplace culture and exceptional people practices, consistently ranking amongst India’s Top 10 Companies with Best Health & Wellness Practices by SHRM & CGP Partners and listed by Working Mother & AVTAR as one of the 100 Best Companies for Women in India.

ksqlDB in Data Engineering at Games24x7

Using AI to Power the Science of