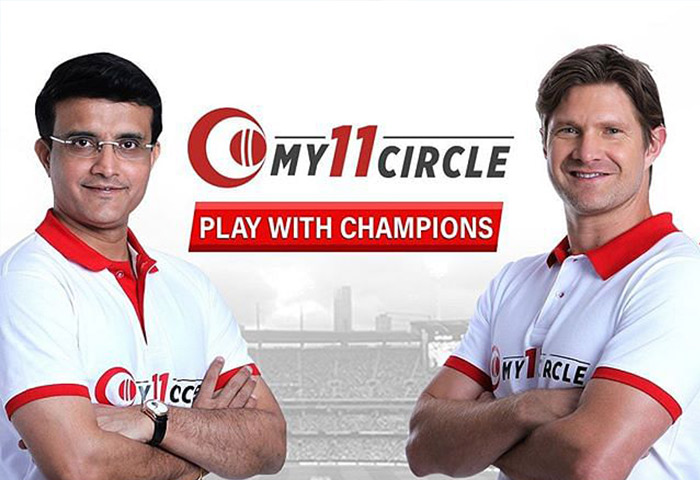 Compete against legendary cricketers on fantasy app My11Circle in the ongoing domestic Australian T20 series and you can win Rs. 1 crore!

Kolkata, December 20, 2019: Indian cricket fans can now compete against legendary cricketers on My11Circle – one of India’s leading fantasy cricket app – as Shane Watson joins Sourav Ganguly on the platform. Shane Watson will create his team for every match in the domestic Australian T20 league, thereby enabling My11Circle players to ‘Play with Champions’ and win the grand prize of Rs. 1 crore.

My11Circle has become increasingly popular amongst Indian cricket fans after it introduced “Beat the Expert” contest. Its growing popularity is largely attributed to the unique proposition of empowering fans to compete against eminent cricketers. They can participate in ‘Beat the Expert’ contest and if their team scores more than the expert, they can win exciting cash prizes.

Apart from daily wins where a player can bag 3 times more cash prize by beating the expert, there will also be a leaderboard for the domestic Australian T20 series. The player who tops the leaderboard will receive the grand prize of Rs. 1 crore. The runner-up will take home Rs. 20 lakh and the player holding the third rank will receive Rs. 5 lakh. On the whole, there will be 15,000 cash prize winners in the tournament.

Speaking of his association with My11Circle, Australian Cricketer Shane Watson said “I am excited to join hands with My11Circle and engage with fans through this platform. I feel this is a truly unique concept where fans can play with cricketers. I am looking forward to this experience.”

Speaking on the development, Bhavin Pandya, Co-Founder and CEO, My11Circle said, “It gives me immense joy to welcome Shane Watson on My11Circle. The participation is already going through the roof with players competing against Sourav Ganguly’s team for India matches  and, with Shane Watson coming onboard for Australia’s domestic T20 series, it will only intensify further. The entry of Shane Watson is perfectly in line with our vision of ‘Play with Champions’, and we will continue to  delight our players as we grow from strength to strength.”

My11Circle Brand Ambassador, Sourav Ganguly said, “Cricket enthusiasts know that cricketing is much more than entertainment. It is a game of tact and acumen which only comes with experience and insight. My11Circle is a platform that provides fans with an opportunity to  exhibit their cricketing knowledge and play with actual cricketers, this makes all those news updates, post-game analysis, as well as TV and in-person discussions with friends a lot more relevant. I believe this is what sets My11Circle apart and contributes to its traction.”

My11Circle received tremendous popularity  during the World Cup season earlier this year with more than 2 million player registrations and over 4 million teams competing against Dada. With the ongoing domestic Australian T20 series and Shane Watson onboard the app is expected to entertain more Indian cricket buffs as they play with the real champions!

Launched in 2006, Play Games24x7 is an online desktop and mobile gaming company that has leveraged technology to bring people an awesome experience of playing games that they have always loved and enjoyed. The very affable Indian card games, Teen Patti and Rummy that were restricted to the living room during the festivities, are now played every day at a competitive level in the limitless digital world. It now introduces players to the world of online fantasy games with its new fantasy cricket gaming platform – My11Circle.

Backed by a strong technical support team, seamless payment gateways, and engaging user interface, Play Games24x7 launches My11Circle on mobile and desktop, powered by RummyCircle. It stands as a market leader, providing the best gameplay experience to the user. Over the years, Play Games24x7 has developed a deep understanding of what players look for in a game. What makes them stand apart is the ability to provide a customised gameplay experience to each player. In the past, the company has also seen investment from Tiger Global Management, a leading US-based technology-focused hedge fund. Play Games24x7 launched Fantasy Cricket on My11Circle, Rummy on RummyCircle, Teen Patti and Poker under Ultimate Games banner, and has recorded cumulative thirty-two million registrations and downloads for all the games put together.